What we see and what we get

My wife has a very passing interest in astronomy. She’s smart, she’s blessed with intellectual curiosity and she finds the things I post about interesting (or so she says, she’s also very polite), but there’s more to it than that. The issue for her primarily seems to be the difference between what you see in long exposure shots of celestial wonders versus the reality of what you see in a telescope. I posted earlier about how amazing it is to see things through the eyes of the Keck and Hubble, but even those are multiple long-exposure shots,  filtered, processed and layered on top of each other. The result is very beautiful and can even be representative of what things might look like if we were much closer to these objects, but usually they’re false-color for both aesthetic and scientific reasons. To make matters worse, we have a turbulent atmosphere. When you do find an object in your scope, it often boogies around, in and out of focus. The severity of this disturbance is called “the seeing” (“good seeing” refers to less of this, “bad seeing” is more) and is something amateur astronomers are VERY aware of.

Yesterday I posted the Hubble image of the nebula in Orion, which is a beauty. It’s full of color, fine detail and you can easily imagine future space travelers having their futuristic minds blown when they look out the spaceship window and see that staring back at them. On earth, in the 21st century, however, our view is a little different. Of course, a big scope can see more than a small scope, usually, but this is what the Orion nebula looks like for you or me:

Still very cool, but it’s not even remotely the same thing. I still get excited to see images like this, though through a “normal” privately owned scope, even a big one, it’s not even going to seem as colorful as this. Seeing nebulae and star clusters from a dark field are still amazing and inspiring, provided you don’t think you’re going to see what Hubble sees, it’s just a matter of setting your expectations properly. Every once in a while I see a big scope for sale on ebay, which someone spent A LOT of money to get and then only owns for a few months. They all say the same two things: the scope was bigger than they thought (it really shouldn’t be a surprise that a 16″ mirror needs an even bigger housing) and they didn’t see what they expected to see.

But wait! There’s still some good news. There’s some stuff that is a LOT closer and looks pretty amazing, even in a small scope. For one, we have a large object only 250,000 miles away and it’s covered with crazy stuff. The moon can be enjoyed with the naked eye, but even in a modest telescope, or simple binoculars, the craters and details JUMP out at you.

Now THIS is something you can see and it's been out there, this whole time, just waiting for you to take a closer look.

But what about the planets?  Mercury (almost) never gets so far away from the sun that you can get a good look and Venus is so cloudy its phases (just like the moon) are interesting, but that’s about it. Jupiter and Saturn, on the other hand, are my favorite targets. As you can imagine, you’re not going to see them like Voyager did, but they’re still really something to behold.

Not too shabby for 3/4 of a billion miles away.

So, there you go. Expectations are what determine whether or not you’re going to be amazed or disappointed, but choosing a good target can make a big difference too.

Lastly, don’t forget about the sun. It’s a measly 93 million miles away, friggin huge compared to everything else in the solar system and if you can see it through a good solar telescope, NOT a regular unfiltered scope (you’ll burn your eye out kid), you’ll see more than you might think. Just don’t look at it directly without protective eye-wear, and no, your RayBans don’t count. 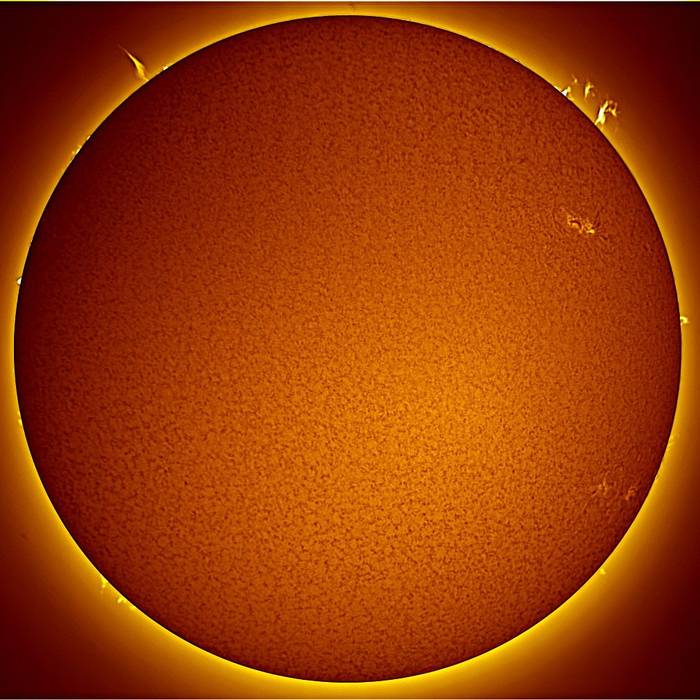 Do it right and you can see this. Do it wrong and you'll never see anything again, ever.

The first steps though, should you want to take them, are free. Just find a good spot and look up. Take some time, maybe bring a free star chart or download a free app for your phone. Let yourself have 45 minutes of peace and quiet while looking at the night sky and you’ll come away with something valuable that most people forget they can have. You really can’t go wrong. Plus, you never know, maybe you’ll want to take a closer look next time.