What is it that everyone loves so much about Pluto? It must be the mystery and controversy that seems to follow it wherever it goes. It’s not big, it seems there might be MANY more objects like it out there in the depths of the outer solar system and we truly don’t know all that much about it. We know its mass, we know its orbit and we know it has at least four small satellites. We also know Disney gave it a tribute with a dog character that actually acts like a dog, unlike Goofy, who is also a dog but acts like a person, which has always been confusing to me.

Animated characters aside, everyone knows Pluto is floating around out there and most are familiar with at least some of the controversy regarding its reclassification. Note that I didn’t call it a “demotion” from its previous designation as a planet. We call it a “dwarf planet” now, which I think feels a bit like some politically correct platitude we use in place of something that implies more diminished significance, even if something else might be more scientifically useful.

The issue, in essence (which is best understood if you read Mike Brown’s book), is that the word “planet” isn’t very descriptive. It comes from a Greek term ASTRA PLANETA, which literally means “wandering star”. If all you can do is look at a point of light that seems to change position relative to the other points of light in the night sky, then yeah, I guess that works, but today we need something a bit more exact. Mercury and Jupiter couldn’t be more different, once you get a good look at them, yet we use the same word to describe them both. Heck, Titan (Saturn’s largest moon) is even BIGGER than Mercury and has a real atmosphere, but it’s just a moon. See the problem?

Eris was originally known publicly as Xena, its moon Gabrille.

To make things worse (for Pluto’s street cred anyway), we now are finding that there may be hundreds of Pluto-size objects in the Kuiper belt. The total number of smaller objects out there certainly number in the thousands. Many have HIGHLY elliptical orbits, even Pluto’s “crosses” Neptune’s (don’t worry, they’ll never collide), and some might even be hiding in plain sight.

We're going to laugh about images like this soon.

The good news for Pluto, aside from the fact that it’s now clear people have some serious emotional attachments to it and are willing to insist that it gets respect, is that we’re going to get a close look at it. With a name like that of a celebrity rehab facility, New Horizons is just a bit more than half way there and is moving FAST. It launched the very year Pluto left the Planet Club (2006) and will arrive in 2015. To offer some perspective, Saturn is about 750 million miles away, yet the closest Pluto ever gets is about 2.6 BILLION miles away, the furthest is almost TWICE that. And you complain about your commute.

Plus, it’s downright hilarious to think about the engineering feat that goes into reaching a target as small as Pluto at such a distance, when it’s moving, nine years after you launch. 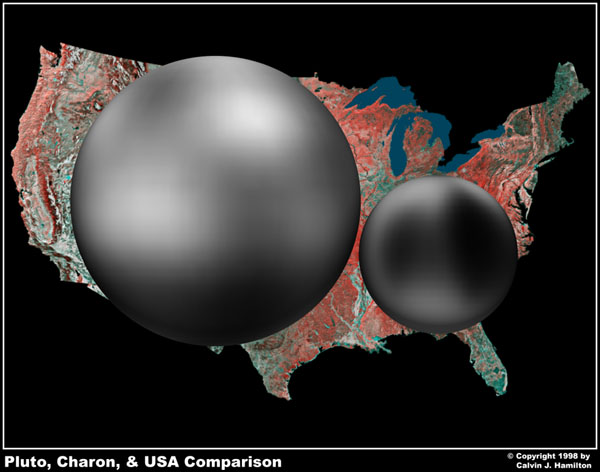 Texas is not amused.

My guess is that once we get a close-up look at Pluto and company, we’re going to have a lot to talk about. There is no doubt that the discoveries made in this decade about these far out “Planetarially Challenged” worlds will teach us something about our solar system’s history. This is an exciting time for planetary science and spacecraft not withstanding, as our ability to observe our little corner of the galaxy improves, so does the frequency of our discoveries. Instead of manually trying to spot minute changes in a sea of little white dots on large photographic prints, we have digital imaging and software that can show us things we’d never find otherwise.

Normally I’d suggest trying to get out there and having a look at Pluto yourself, but it’s not at all an easy target. I’m not saying you shouldn’t try, but know what you’re getting yourself into. The fact it was discovered in 1930, at all, is astounding. 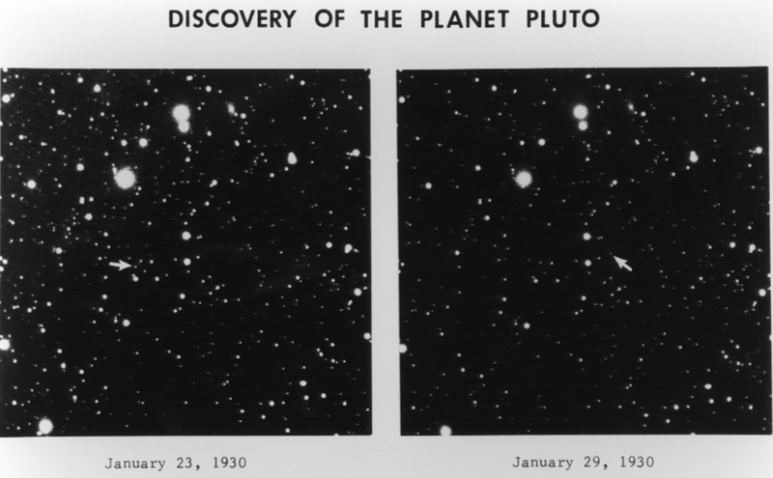 It practically jumps right out at you. I nearly flinched.

After some drama at the Lowell Observatory, a young Clyde Tombaugh was tasked with finding planet number nine. The funny thing is, the planet he was tasked with finding was not Pluto, but the mysterious “Planet X”. Neptune had been discovered not long before using careful observation of Uranus’ orbit and some math, but there was also a hint (or so they thought) that something else was messing with it as it slowly traveled around the sun. Pluto was not the scrappy troublemaker they had been searching for, but Tombaugh went ahead and found it anyway. It just happened to be the Kuiper belt object that was where Planet X should have been.

Through the 76 years of a nine planet solar system, Pluto has seemed to carry more pathos than any other celestial body. Even the way its name came about is touching. Instead of getting bent out of shape over messy designations, let’s just appreciate it and its Kuiper belt brethren for what they are: part of our solar family, history and culture.