As I mentioned once before, amateur astronomers love their stuff. There are many of them out there that happily keep a dozen or more telescopes, long with a dizzying array of do-dads and accessories that go along with them.

I take a different approach, but I still love to keep track of what’s new and cool. So, I thought Monday would be a good day to post about some of what’s coming and what’s out there. 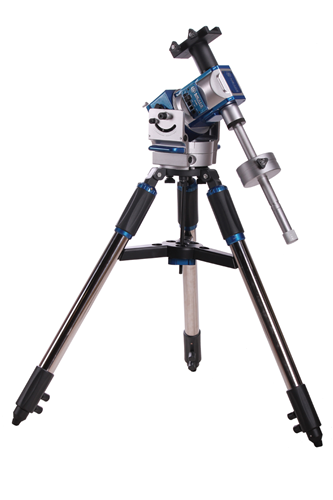 Available in any color you like, as long as it

Meade is about to start shipping a the new LX80 mount next month and I think it’s worth a close look. It is advertised as “Three mounts in one”, but it’s more like two with some swappable bits.

You can set it up as an equatorial mount OR an altazimuth mount, then choose between using a counterweight or slapping a second scope while in the alt-az mode. By looking at its design, it resembles a tiny version of one of their top-end robotic mounts and claims it can hold 70lbs(!) of payload, though that’s the two-up configuration only, otherwise it’s 40lbs, which is still impressive for a $800 unit. The way it’s described, this price includes the tripod and it has some crazy feature that talks to you about the things you’re viewing. Seems like a built-in Skyscout and kind of gimmicky. It’s cheap for a medium capacity goto mount and Meade is a good name, but is the person who drops $800 on only a mount really going to want to have it tell them facts about the moon? Maybe, but I don’t think so. And no polar finderscope?

Regardless, I think unless this thing turns out to be a piece of junk, which is doubtful, this will be a HUGELY popular item.

Of course, as with all things, if you want to step it up, you can add a zero and get the LX800.